Have I told you cookies are my weakness? Chocolate is too. I know you've heard that. Homemade chocolate chip cookies could very easily control my life. Now, what about chocolate chip peanut butter cookies? 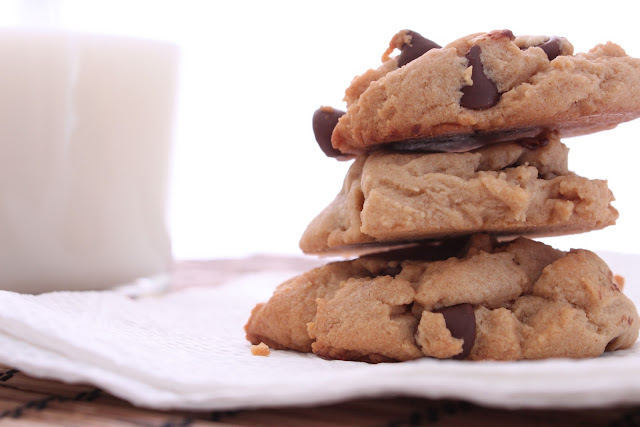 I will not let them control my life... 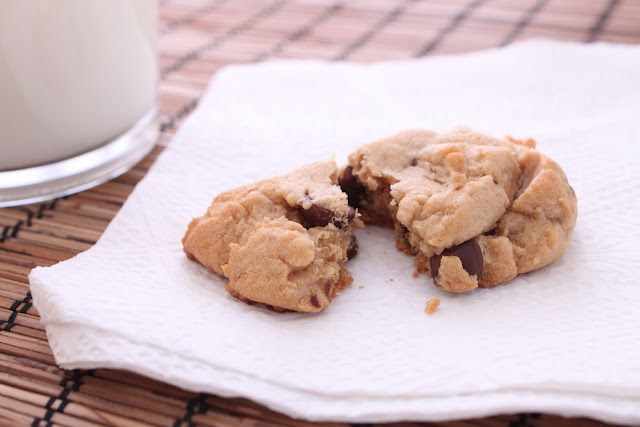 I did not eat all the cookies I was taking pictures of. I have more self control than that... 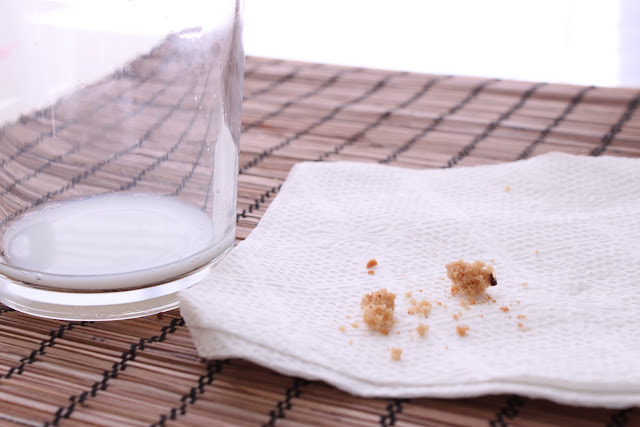 Beat butter, peanut butter, and sugars until creamy. Add eggs and vanilla, beat until blended. In a separate bowl add all dry ingredients and slowly mix into butter and sugar mixture. Stir in Chocolate Chips. Drop spoonfuls onto ungreased baking sheets. Bake at 350 degrees for 8-12 minutes. Cool on wire racks.
Posted by Francesca Marie at 9:16 AM 2 comments:

I'm not much of a hippy. I like pink and caffeine too much to be a hippy. However, I could totally see myself with waist length hair wrapped in a wreath of wildflowers, wearing a flowy skirt and lots of leather jewelry, strumming on my guitar in a field of daisies munching on my homemade/organic/unprocessed/vegetarian picnic. The only reason this image of me as a hippy came to mind was because I used natural peanut butter in my granola bars today. I felt like I was saving the planet one peanut at a time. 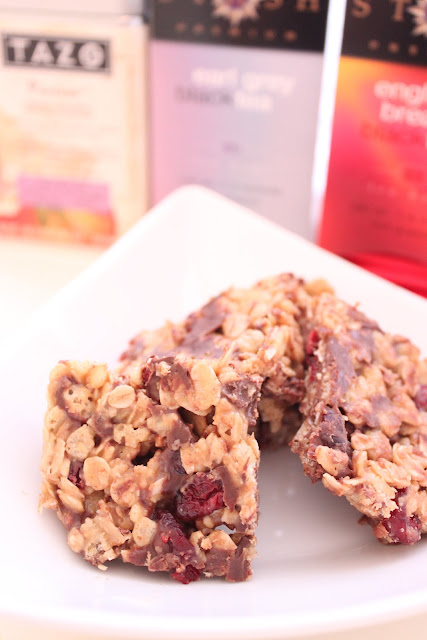 I used honey to sweeten it. Impressed? 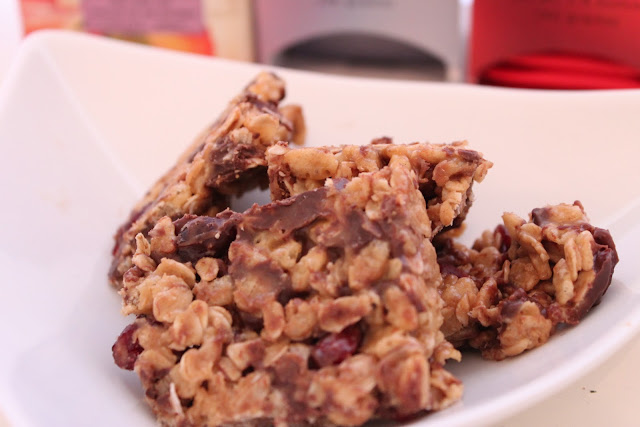 In a medium sauce pan melt honey, peanut butter, and butter. Remove from heat and add the rest of the ingredients. I like to add the chocolate chips when it is still warm because it melts it a little, but not all the way. But you can let it cool a little more before you add them, depending on your preference. Spread in a 9x9 pan and refrigerate until hard-ish (20 minutes).

Enjoy being a hippy.
Posted by Francesca Marie at 6:33 PM 2 comments:

Calvin needed a haircut bad. So, a pair of craft scissors and Bradley holding his head still resulted in this... 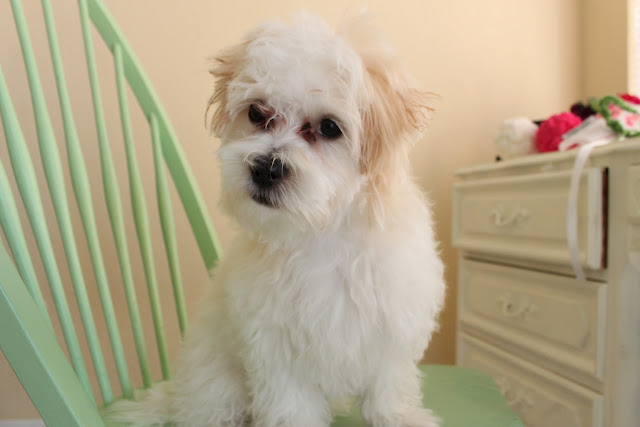 Poor thing. Next month he is switching hair dressers. 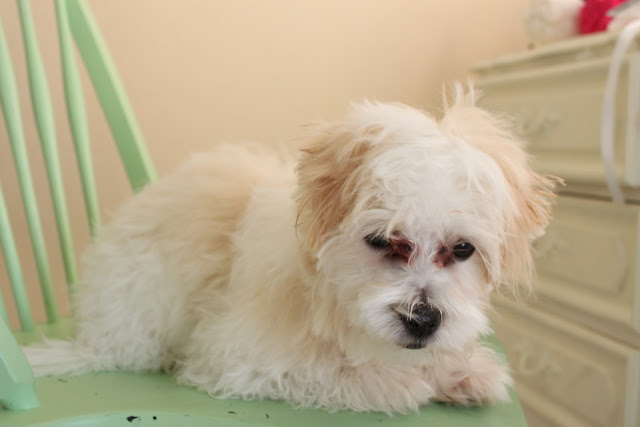 Posted by Francesca Marie at 11:08 AM No comments:

Is it okay to start my day with this? 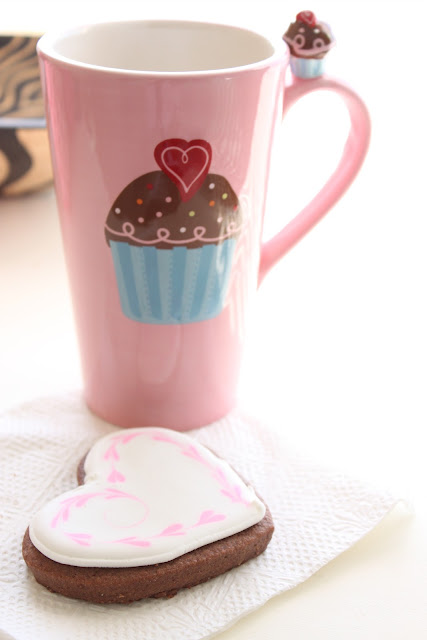 I sure hope so....Caramel Macchiato creamer, almost as good as starbucks.
Posted by Francesca Marie at 10:41 AM 2 comments:

You are like a miniature Buddha, covered with hair....

If I had to choose one color to wear the rest of my life...I'd choose black. Piece of cupcake! I could totally rock the all black look without going gothic. Also, black is slendarizing, which means I'd be able to eat the extra cupcake...or cookie.

If I were to choose one color to decorate with...I'd choose pink. 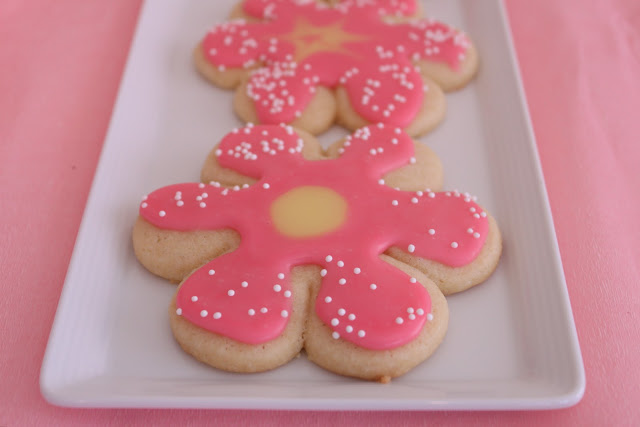 Thank goodness I don't have to choose because these cookies really need that blob of yellow.

I probably shouldn't use the word "blob" it makes my cookies seem unappetizing.

Even with the "blob" they were good! I wore all black today so you can trust that I went for that cookie. 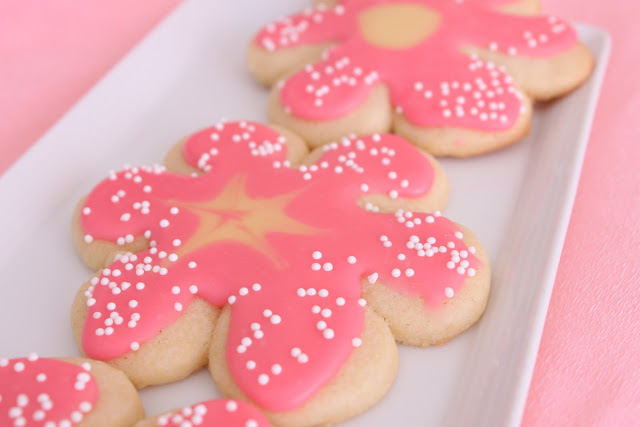 Don't you think that pink and yellow look SO good together? It is so hard for me not to put those two colors together. Here is a quote from a previous cupcake post (entitled "I can't handle the cuteness"), "pink and yellow, pink and yellow! I do have a fondness for pink and yellow!" Oh man. When I read back over some of the stuff I've written on this blog I can't help but say to myself, "hello crazy."

By the way, my wedding colors were pink and yellow. It was FABULOUS. You can ask my bridesmaids. They totally wear their bridesmaid dresses every day. 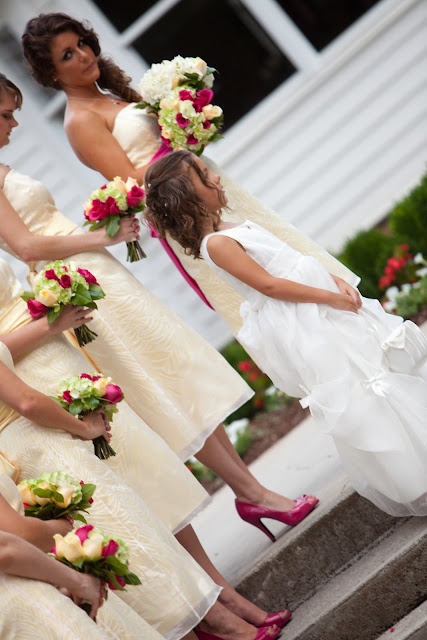 Aren't they cute? Check out Gina peaking during the prayer.

I love anything girly. I love tea parties and flowers. I love decorating and crafting. I love the color pink, feathers and leopard print (and zebra print too for that matter). Cupcakes and cookies make me smile. Especially when they are made for a beautiful girl who happened to turn 1! When she grows up I hope she likes the color pink, feathers and leopard print too. 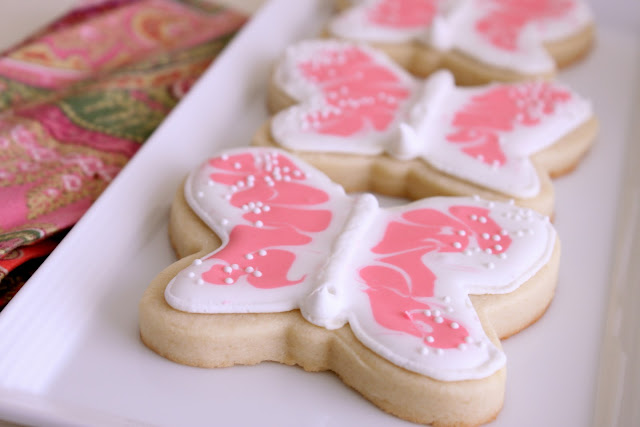 oh, and I hope she likes butteflies. 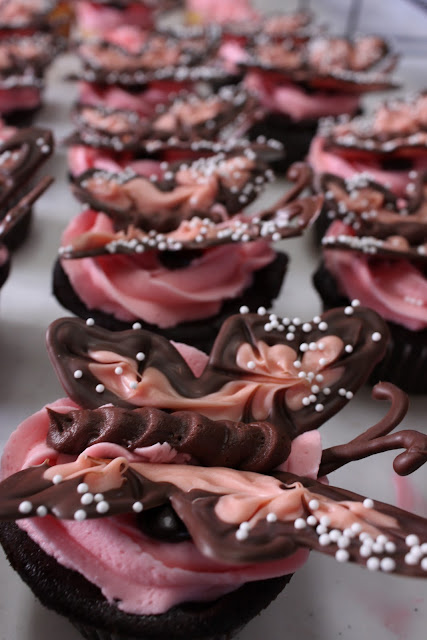 Because I made her a lot of pink butterflies 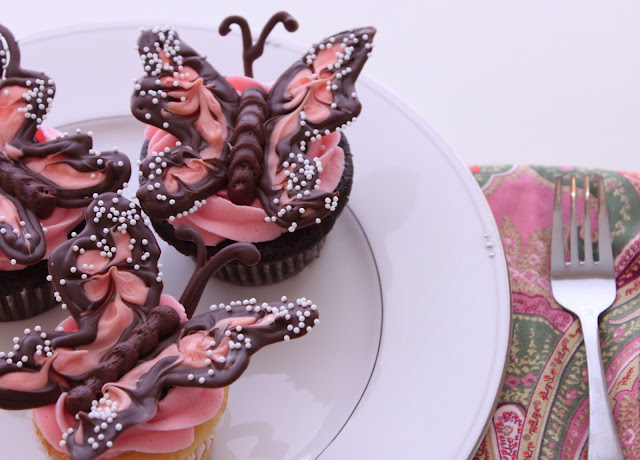 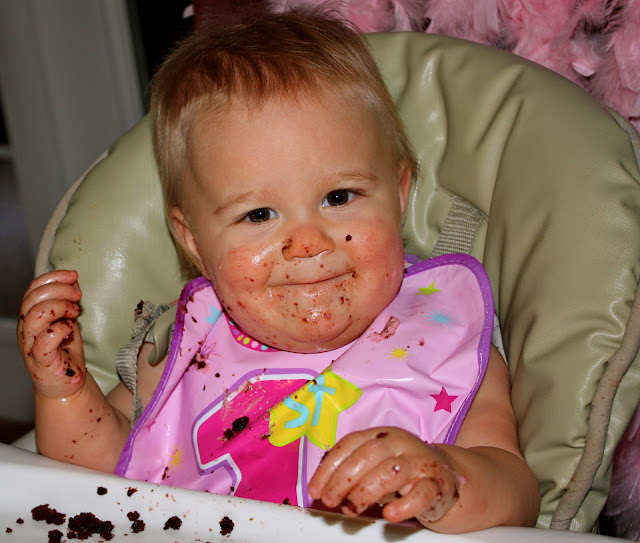 I think she enjoyed her birthday cupcakes! 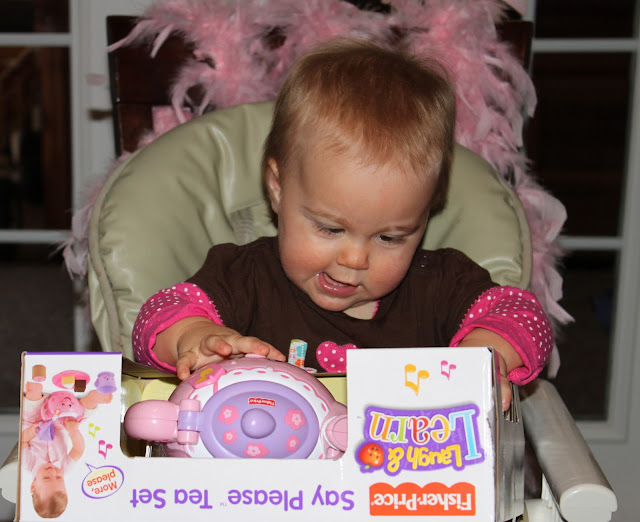 Look at her with her birthday boa and her tea set. We've already planned a tea and cupcake party (she's quite the party planner) 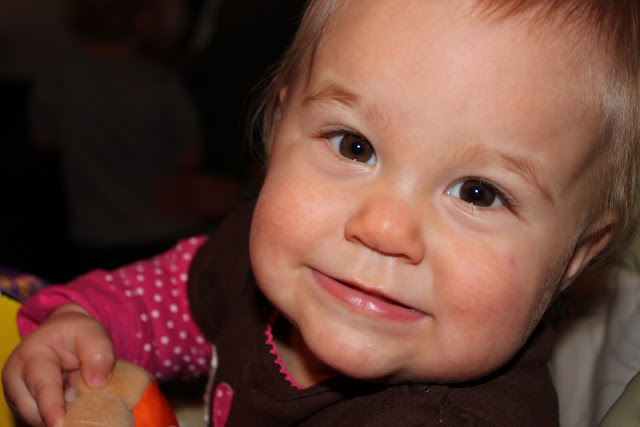 Happy Birthday Sweet Julia!
(I know it was your favorite birthday ever!)
Posted by Francesca Marie at 10:37 PM 2 comments:

My life has been consumed in an attempt to learn Hebrew. If you think that sounds hard, you couldn't be more right! When I say I'm bad at languages, that is an understatement. I've attempted French, Spanish and Italian and failed utterly at all three. I know this because teachers have told me I am terrible. But, somewhere in this tiny brain, I thought learning a language comprised of symbols that requires you to read right to left would actually work for me.

Did you look at it right to left? Probably not. The alphabet starts with Alef and ends with Tav. And that's not even including the vowels or accents!
Ok, thank you for listening to me (or reading) this far. As you can imagine, I have had no life, nor will I have a life for the next week and a half. But after that you can call me Rabbi.
And as your Rabbi, I urge you to make this cranberry-white chocolate almond biscotti. It is winter, and there is nothing better than a cup of coffee and a biscotti as you ponder the Hebrew language. 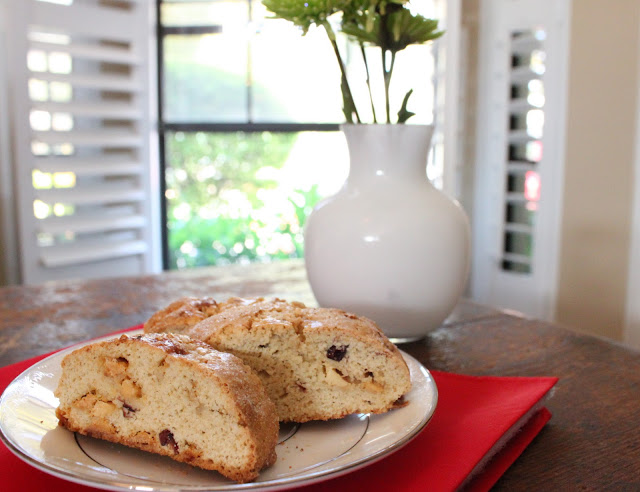 Preheat oven to 375°F. Place cranberries in a small bowl, and add boiling water. Let stand until plump, about 15 minutes. Drain, pat dry, and set aside. Sift together flour, baking powder, and salt into a medium bowl; set aside.

In a large bowl beat the butter and sugar on medium speed until light and fluffy, about 2 minutes. Add 3 eggs, one at a time, beating to incorporate after each addition and scraping down the sides of the bowl as needed. Beat in vanilla and almond extracts. Add flour mixture, and mix on low speed until combined. Mix in the drained cranberries and the white chocolate chips.

Turn out dough onto a lightly floured surface; divide in half. Shape each piece into a 16-by-2-inch log, and transfer to prepared baking sheet, about 3 inches apart. With the palm of your hand, flatten logs slightly. Brush beaten egg over the surface of the dough logs, and sprinkle generously with sugar.

Bake, rotating sheet halfway through, until logs are slightly firm to the touch, about 25 minutes. Transfer logs on parchment paper to a wire rack to cool slightly, about 20 minutes. Reduce oven temperature to 300°F.

Place logs on a cutting board. Using a serrated knife, cut the logs crosswise on the diagonal into ½-inch-thick slices. Place a wire rack on a large rimmed baking sheet. Arrange slices, cut sides down, on the rack. Bake until firm to the touch, about 30 minutes. Remove pan from oven; let biscotti cool completely on the rack. Biscotti can be kept in an airtight container at room temperature for up to 1 week.

My New Year Resolutions started with a desire to freshen up my home and clear out my closet. I'm keeping my resolutions for the first time in my life!

Look at this steal I purchased from Goodwill for $19.99. 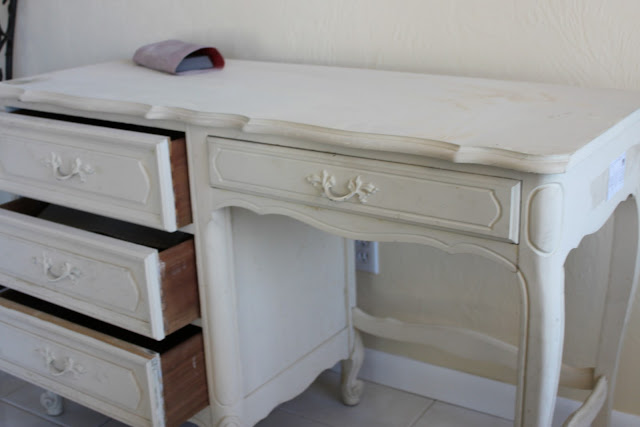 I'm just giddy with excitement! What a find!

It required just a little work. 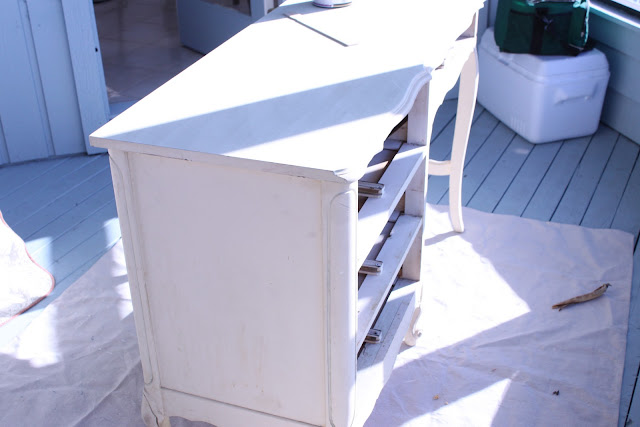 I have a love-hate (or love-love) relationship with Martha Stewart. I love her, well, because she is amazing. I sit on the floor at Borders bookstore in the cooking aisle and drool over her cupcakes. But, I also hate her (or love her even more), because she can take a bag of garbage and turn it into a 5 course meal complete with a centerpiece and place cards made out of pinecones, pots, plants, fruits, vegetables, cheese you name it she can make it (or at least her little elves can). Every recipe I have ever made of Martha's (please note, first name basis) has turned out delicious! My personal favorite was the Ginger Pumpkin bread.

But following a close second were her Cranberry Pecan Cookies...once they were dipped in Chocolate. I know, I am completely predictable. The words I live by are, "When in doubt add chocolate." 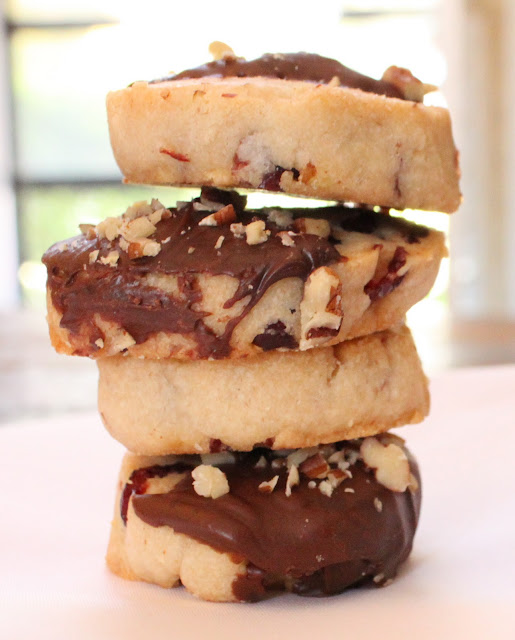 Turn dough out onto a clean work surface, and divide into 2 equal pieces. Shape each piece into an 8-inch log, about 2 inches in diameter. Wrap logs in plastic wrap, and refrigerate until firm, about 2 hours.  *Note: This can be frozen up to a month

Preheat oven to 375 degrees. Using a sharp knife, cut logs into 1/4-inch-thick slices. Transfer to greased baking sheets. Bake until edges are golden, 14 to 16 minutes, rotating baking sheets halfway through. Remove from oven, and transfer cookies to a wire rack to cool completely.

Once completely cool dip half of the cookie in melted chocolate, place on rack and sprinkle with remaining chopped pecans. Wait for chocolate to harden before serving.


Posted by Francesca Marie at 10:41 AM No comments:

My poor pup has an under-bite. It's true. I never noticed it until his Vet pointed it out...now I can't help but notice it all the time. 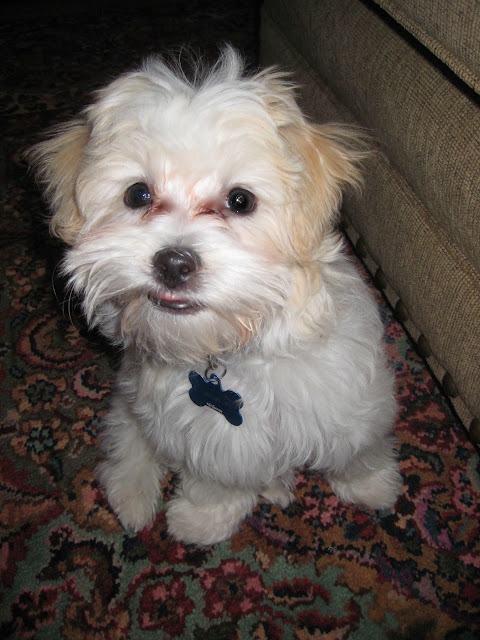 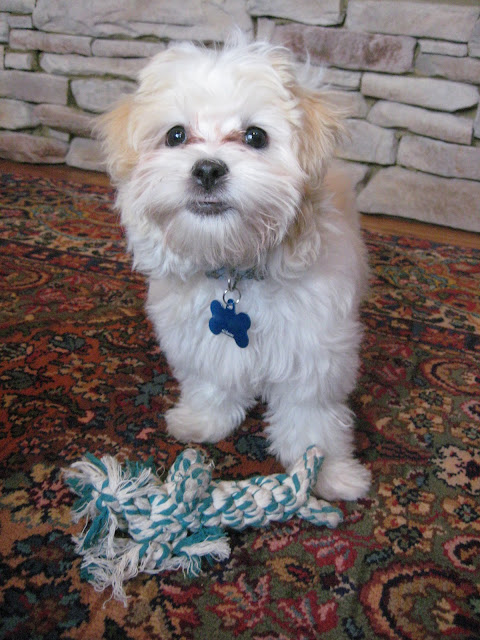 I love this picture. He looks a little crazy...
But, who can blame him when his owner-parents are pretty crazy themselves... 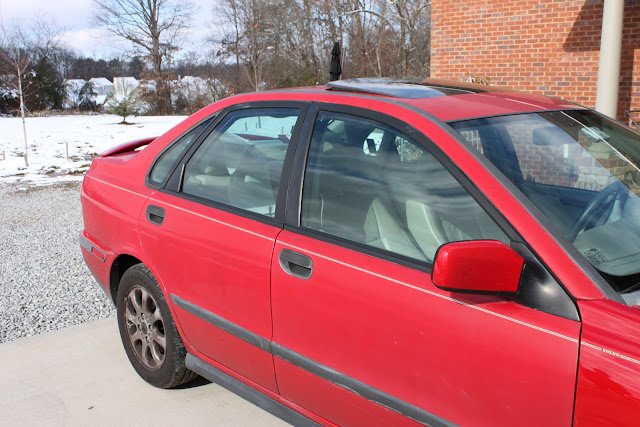 We drove drove 10 hours in the snow with our sunroof open! And, we complained about a draft the entire time. Oh brother. Reminds me of my Easter project key episode... You can read the drama Here.
Anyway, the point of this post is to find out if anyone knows of a doggie orthodontist?
Posted by Francesca Marie at 9:30 PM 1 comment:

I wrote a check today and dated it 1-4-10. It was wrong for multiple reasons.

I feel like one of the old people saying, "I can't believe it's 2011, where did the time go?" and "Wasn't it just yesterday that we were stock piling water for y2k."

Did you make any New Year's resolutions? My resolutions are always impossible to keep, lose 30 lbs and run a marathon (You can click here to read about last years). Yeah, right, have you ever read this blog before? I love to bake and I hate to run. This year I kept it simple. Organize my closet. Check and Check! I'm awesome. Your welcome, Goodwill. 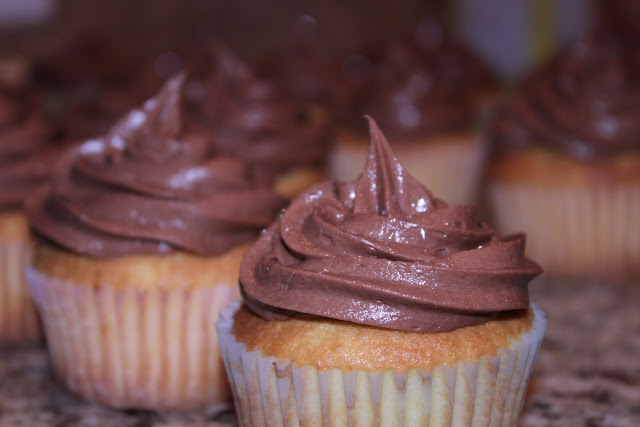 It's not a holiday without a festive cupcake. These cute guys are glittered New Year Cupcakes! The shiny-ness is glitter. Love. 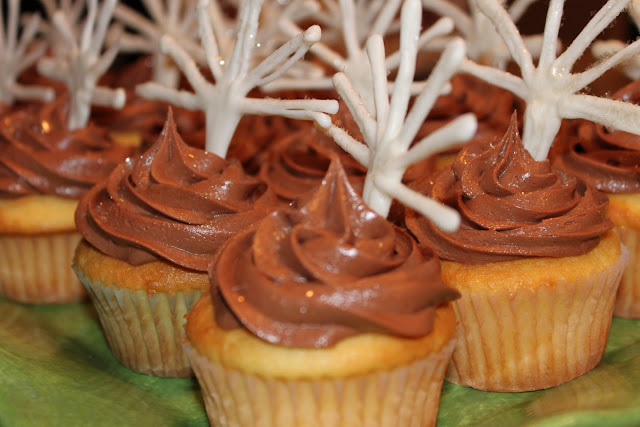 Those white chocolate starbursts are suppose to be festive...I think they are cute. 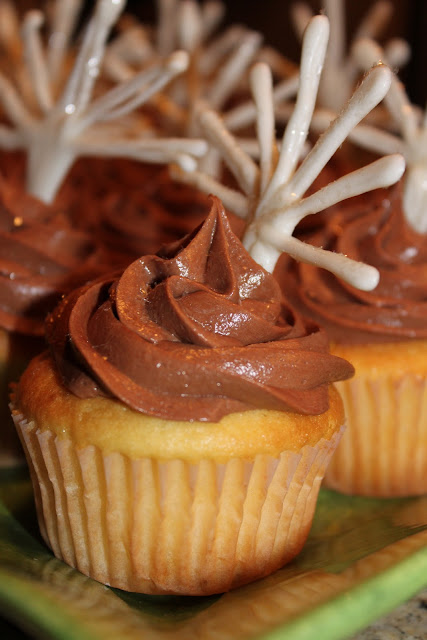 My other New Year's Resolution is to make more cupcakes. mmm. That's a good one.

Cupcakes inspired by : I Am Baker
Posted by Francesca Marie at 8:47 PM No comments: