Do you want to hear another Terrible Tuesday story?  It all started on my drive to class, I was singing along to the local country music station when I realized I had passed my exit. A combination of driving in the fast lane, the radio, my singing, and a semi truck added about 10 extra minutes to my morning drive. The result was an extra $1 in tolls and I missed being able to get to the bookstore for my morning coffee from Calvin's Coffee Contraption. Being in a relatively good mood I complained only 3-4 minutes and went on with my day.

4:55 p.m. finally arrive and I jumped in my car excited about getting home 5 minutes earlier, so I could lay on the couch 5 minutes longer, before I had to go on my couch to 5k run. I called Bradley and talked to him for about 15 minutes...evidently I can't multitask. Because I suddenly realized that I didn't know where I was! I had gone the opposite direction for 15 minutes and racked up $4 in tolls!!!! (I apologize for the multiple explanation points, I believe that if you can't convey emotion without the use of caps or excessive explanation points than your point is most likely not worth making...but it's just one of those days). This time I blamed Bradley, the turning lane and the cell phone.  Let's just say my complaining lasted more than 3-4 minutes.

FAIL. Two Tuesdays in a row.  Coffee making and driving are too hard for me.

But you know what's not too hard for me or for you?

Making a cake mix fancy! (Like how I transitioned there?) 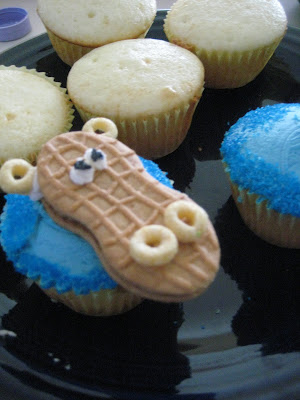 Last night I posted pictures of the cupcakes from the UT vs. Florida football game, but I didn't get to post the recipe.

I'll admit it's been hard for me to find a really good cake recipes. I have found a chocolate cake recipe I really like, I found a brownie recipe that is to die for, and a buttercream that makes it really hard to try try anything new.  But I still really like box cake mixes...

So here is a little box cake embellishment for your cupcakes.

Combine all the ingredients and follow the directions on the box. And then congratulate yourself on living your life to the fullest and making perfectly yummy cupcakes. Even someone who can't remember to put coffee beans in the coffee maker and is directionally challenged (after driving that route for a month) can do this. That's the moral of this story and my word of encouragement.