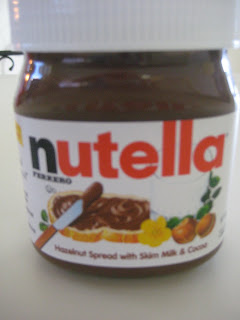 Nutella...Oh the memories Nutella brings. Mainly, backpacking across Europe with my best friend a trip that resulted in much stupidity and robbery (3 times...that is, us being robbed, not us robbing). My friend and I, along with our overloaded backpacks filled with an unnecessary amount of clothes, hair products, and nonessentials, carried around a giant tub of nutella and a bag of shortbread cookies (one of the reasons I gained weight instead of losing weight on my 6 week trek across Europe). I remember our Australian hostel friends being shocked to see us dip cookies in nutella. I'm not quite sure why they had never tried it before... 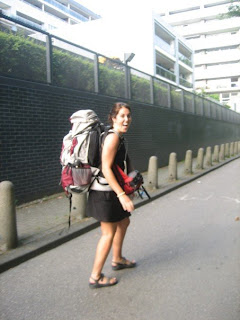 Look how happy I am to be in Amsterdam...I'm actually on my way to get robbed. I actually categorize my time in Europe as before or after 1st, 2nd or 3rd robbing. The 3rd was the humdinger when the scoundrels took all our remaining money and our passports. We were forced to flee to the U.S. Embassy in Paris (which resembles a DMV-- disappointing and infuriating) and beg for money in order to get new passports. Sad, but true. 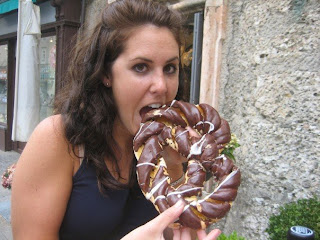 Let's remember happier times...I'm in Salzburg, Austria, eating a giant pretzel (obviously). This picture is right before I burst into song, "The hills are alive with the sound of music!" And yes, yes they are. Even more so after eating a jelly filled chocolate covered pretzel. Genius!

I think the main reason our trip had so many....ahem...adventures...was due largely to the lack of a plan. We traveled Europe not knowing half the time where we were going or where we were staying that night. We got kicked of a train once. That was awkward. We also booked what we thought was a 7 hour ferry ride, but was actually 30 hours. Yeah, that was great because we slept on the deck. 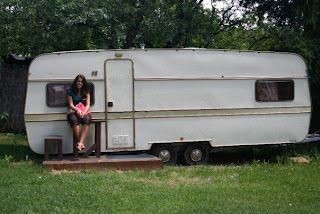 This is an example of not having a plan...This is a camper that we stayed at for 2 nights. We decided to hop off the train and stay at Innsbruck, Austria spur of the moment, which resulted in this lovely housing arrangement.

But, no matter what went wrong, it was still a blast 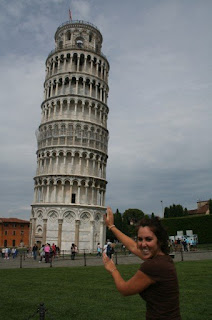 Yes, yes, I know, I'm such a tourist. I stood out like a sore thumb. And yes, it did take a while to get this picture right...I mean, it had to look like I was holding up the Leaning Tower of Pisa... So embarrassing...

Now that I am living safely in the United States of America, (safer than 2 girls traveling across Europe sleeping in hostels, campers, trains or ferries) I think fondly of my European adventures, and have a strong desire for a shortbread cookie covered in chocolate-y hazelnut goodness (nutella) every now and then. So to quench that desire...I made Nutella Cupcakes! 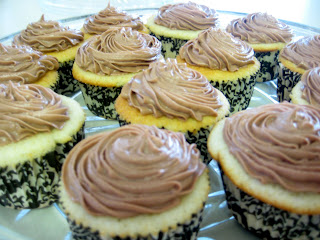 For the actual cupcake I (sorta) used this.