So I heard...or rather, I read somewhere that cupcakes were going out. Going out?! What does that even mean?! The faze is coming to an end, evidently. And what is projected to take over the cupcake frenzy? Pies. HUH? Yeah, I don't get it. Pies are not cute. Pies do not contain delicious buttercream or cream cheese or even runny sour cream icing. Besides, I've been making cupcakes since before I could walk! Well, not really, but I grew up on cupcakes.Don't you remember birthday parties with lots of cupcakes and roller blading? Maybe these gourmet cupcakes that are served in place of a wedding cake are fazing out but cute individual size cakes cannot! Can you imagine wedding PIE? No, no, that is just too painful. Let's save pie for Thanksgiving. I'm keeping the cupcake. 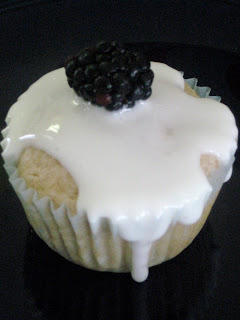 Well lookie here! Who is this cute little guy? It's a grown-up cupcake! 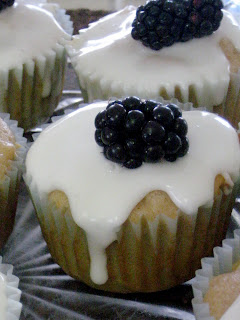 The great things about these Apple and Cinnamon Cupcakes, is that they are almost like a muffin. Meaning, you could definitely get away with eating them for breakfast! Except, the only muffin-y part is the apple-cinnamon combo, which is delicious, but this is a cupcake.

Beat the butter and sugar in a bowl, gradually beat in the egg. Stir in sour cream and vanilla. Combine the flour, baking soda and cinnamon and sift into mixture. Fold in the apple.

Adjust the amount of sugar to reach your desired consistency. Ice your cupcakes right before serving them. If the icing sits on the cupcake for a long period of time (overnight) the cupcake will start to get soggy.

Posted by Francesca Marie at 10:10 AM