I haven't cooked in a while, it's been really busy this Easter season with a lot of evenings being worked, so I was excited to try a new recipe last night for dinner. I can't even believe I'm saying I was "excited" to cook. But part of the reason is because I signed up for The Daily Dish from allrecipes.com and I've been waiting to try an Orange chicken recipe.

Combine your mix in a large bowl and marinate your chicken for about an hour. I used 3 chicken breasts. I actually doubled the recipe because I wanted enough to use as a sauce over rice (but I didn't have to double with only 3 chicken breasts). It was in the doubling that I ran into my problem. There is always a problem. Thankfully it is usually minor enough where I don't even realize it until I'm writing about it. I actually haven't made an inedible dinner on this new cooking kick either, so far so good! I realized my mistake this morning while I was in the in between state of consciousness and sleep: I forgot to double the onion soup mix. This mistake resulted in very orange chicken. 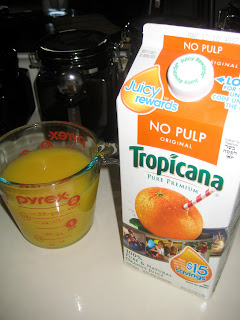 Like I said, I didn't realize at first that I had messed up, and Bradley and I really liked it. It was very oriental tasting. We love Asian food so we liked it, but I think the orange taste was suppose to be more subtle. :-)

After marinating the chicken for about an hour pour into a glass baking dish. Bake uncovered at 350 degrees for 30-45 minutes or until chicken is done. If you bake chicken with bone add about 30 minutes to your bake time. 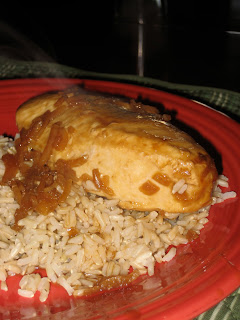 Posted by Francesca Marie at 8:50 AM

Email ThisBlogThis!Share to TwitterShare to FacebookShare to Pinterest
Labels: chicken